On May 21st, I held my breath and re-opened the brood box.

I’d had a good long while to fret about what I would find. I had also, by this time, realized that my habit of walking into the back yard just to watch the bees come and go was not going away anytime soon. (I’m a month behind in my update posts – something I’m working hard to rectify – and I still do this.) Like watching bread rise or watching seedlings grow, I remain fascinated and bewildered by this alien life form that needs so little from me to do what it does. Sure, we “keep” bees: We’ve spread them from their native range — wherever that is — all around the world. We feed them and manage them for optimal honey production, and treat them for pests so that colonies that might die in the wild are more likely to survive, but to say we “keep” bees is an amusing conceit. Keep? Really? Just where exactly are we “keeping” them from going*? (The answer to this is evidently: nowhere. Just look at the spread of the Africanized honey bee.)

All of at is to say: I was getting really attached to my bees. (You know. “My” bees. That I am “keeping.”) I was giddy the first day I saw workers coming and going with little floofs of pollen on their legs. (“Floofs” is absolutely the scientific term for honey bee leg pollen.) Each time I went to visit them, I edged closer and closer to the hive box, in what any experienced beekeeper would no doubt find hilarious levels of paranoia. I dutifully filled the jar of the entrance feeder with sugar syrup as it ran empty.

About the entrance feeder, incidentally…  look, I’m not going to lie. The first time I did this, I was in a full suit. (All the experienced beekeepers reading this are laughing at me, and all the non-beekeepers are thinking, “well, of course you put on a full suit, walking up to the front of a bee hive like that!”) The two and a half bees who actually took notice of me during the process only did so because I blew on them to shoo them off the lid of the empty syrup jar**. My hands were shaking as I gingerly changed out the jars, braced for angry bees and a sting. The absence of any interest at all from the bees made me wonder if perhaps I wasn’t a little… overdressed.

The next time, I downgraded to my long leather gloves. Still no interest from the bees. Still overdressed. (Now, from my oh-so-experienced vantage as a month-and-a-half old beekeeper, I don’t bother with any of that… at least, not with my own colony. The bees really are profoundly uninterested in me when I change out their feeder, except for the part where at the end of it, they have lots of syrup.)

I’ve digressed greatly, but all of this process is what was happening during the time I sat on my hands and valiantly resisted peeking inside to check on the queen. When it was finally check-in day, I suited up, played the “Why Won’t My Smoker Stay Lit?” game (more on this later) for a while, and then — adrenaline surging — opened the box.

Predictably, there was a giant slab of beautiful comb built in the empty space beneath it: Nearly a foot-long wedge of comb suspended from two inches of queen cage:

Unfortunately, there was no choice but to remove that slab of comb altogether. But just getting it out of the box was a little problematic. The only thing to grasp to pull it out and get a better grip was that teeny tiny queen cage. It was very new comb, very soft…. Did I mention it was covered in bees, and I was not at all sure what I was doing? You all see where this is going, right…?

Yep. I had barely lifted the queen cage (comb attached) out from between the frames and begun to think about the best way manipulate it when the comb broke away from the queen cage and fell. THUD. BUZZ BUZZ BUZZ.

The bees and I were equally dismayed, I assure you.

Fortunately for us all, it didn’t fall very far. I’d been moving it toward a bin I’d brought, anticipating that I’d have to remove a lot of burr comb, so it only fell about a foot, right into the bin. Nonetheless… not ideal. I couldn’t help but feel that my career as a beekeeper was off to a not-so-great start. I retrieved the comb and set it across the top of the frames in the hive and stared at it. And frowned at it. And realized that if I’d been less lucky, that fall might have crushed the queen parked right there in the middle of the slab of burr comb.

Do you see her? 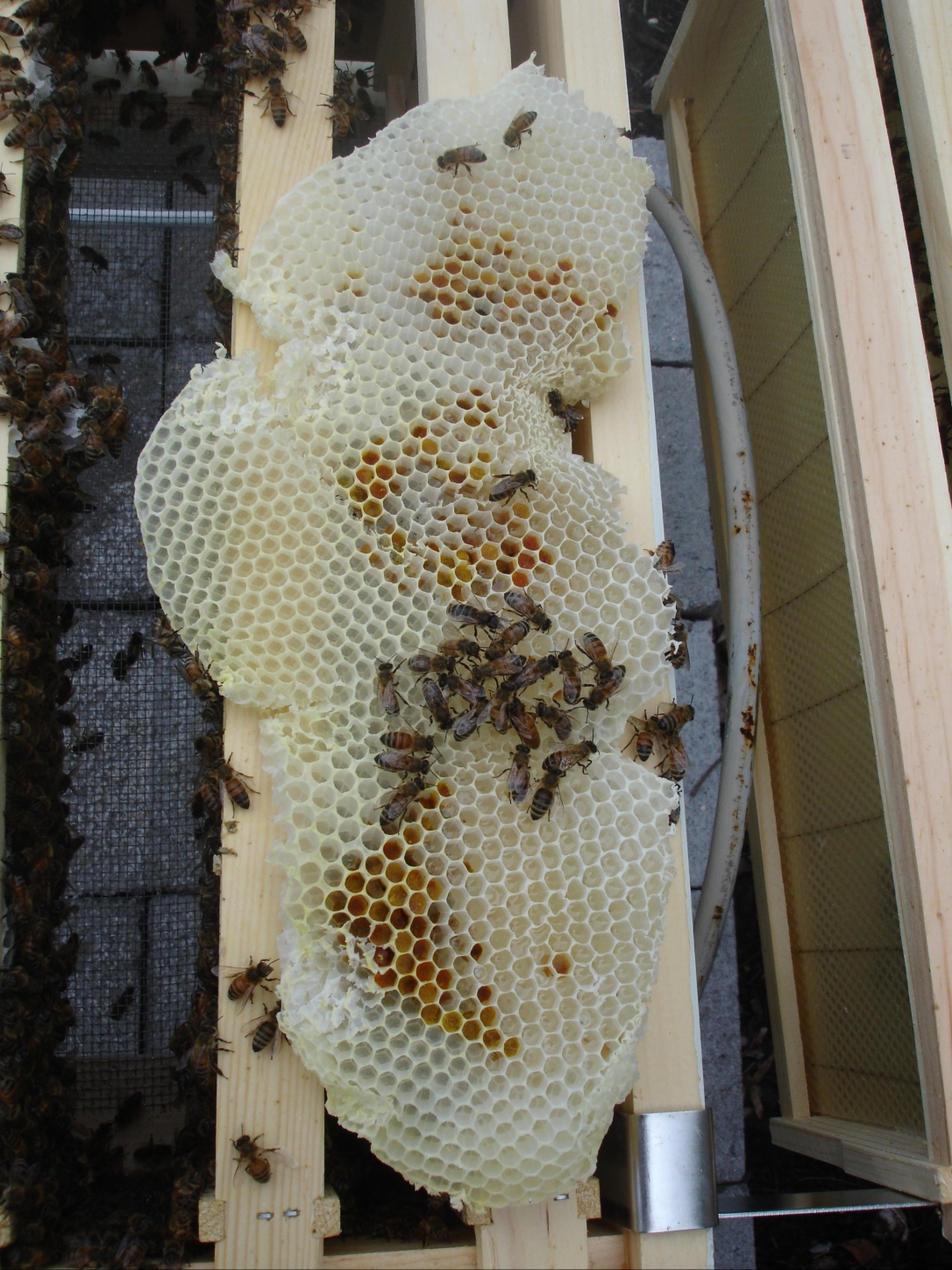 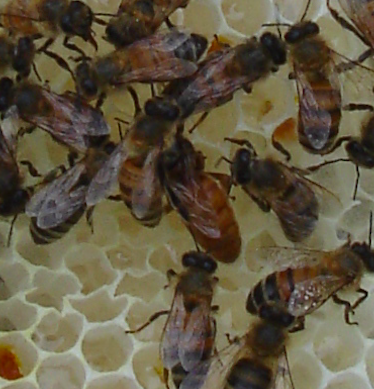 If you are saying, “But your queen is marked with a red dot! That’s not your queen!” then you are thinking exactly what I was thinking. Why, hello, Your Majesty. Who are you?!

A somewhat anxious search through the rest of the frames (which also showed lots of fresh new honeycomb, with a tiny egg in the bottom of each cell – hooray!) confirmed that there was absolutely NOT a queen in the colony with a red paint dab on her back. O-kaaaaaay. Long live whoever-the-heck-you-are, I guess. By this time, the queen that was present had very sensibly relocated herself back down among the frames (queens are photophobic, and do their best to avoid sunlight). I brushed the rest of the bees off the burr comb, closed up the box, and went away very puzzled.

Could there have been an extra queen hidden in my package by accident – and had there been a royal coup in my absence? Had my queen emerged from the cage late and weak, and been killed and… uh… somehow replaced by a … stray queen? A roving bandit queen? One thing I am not short on is imagination, and in about fifteen minutes I’d scripted out a convoluted tale of royal ascension and betrayal somewhere between the next episode of Game of Thrones and Scheherazade.

The answer, it turns out, is far simpler: Just because you mark a queen doesn’t mean she stays marked. Sometimes the paint comes off. Sometimes, the workers decide they don’t like that mark on their queen, and groom it off. Apparently, my bees didn’t approve of this season’s hottest fashion. So after all my agonizing over whether or not to have her marked, the bees took matters into their own hands (er… legs?). I didn’t get a vote.

And that’s how I ended up with an unmarked queen.

*Although I really should start keeping count of the number of people who, when I tell them I have a colony of bees in my back yard, stare at me and ask, “You mean… just flying around loose?!”

**I can appreciate bees for scrounging so diligently for the last dregs of sugar in the empty syrup feeder. This is actually very reassuring behavior. It tells me it is perfectly natural and reasonable for me to keep digging in that fast food bag, in case maybe there just happens to be another lost french fry at the bottom.

2 thoughts on “Long live… somebody, anyway.”

Translate this page with Google: